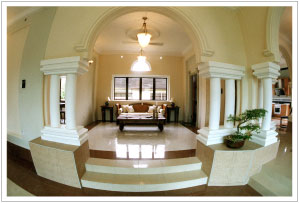 The completion period is reduced by 30% in comparison to conventional construction method. We have completed a two-storey detached house in Petaling Jaya (for a lawyer, Mr. Lee) with a built-up area of 4,600 sq ft. It required only 6 workers in 3 weeks to demolish an existing house, complete the foundations, construct paneling, floor stab and to fit in partitions. It only took 3 months to complete the entire house including internal finishing.

The finishing is excellent. The walls are smooth and the lines clean.

However, the most impressive feature of the construction is the ventilation system. The air-conditioners in the house are used sparingly. Even on a hot day, the inside of the house is relatively comfortable.

We choose this system because we want customers to be satisfied with the quality of houses. We wish to have a constant quality all throughout from number 1 to number 4000.

I think you've got to look at the future outlook of the construction business itself. With less dependent of foreign workers, I think a lot more developers might have to adopt this technique somehow rather.

My house was located at Kajang and was built in the year of 2004, with the built up area of approximately 4600sf.

Mr Khoo the founder of Ostable Panel System take care of the design and build.

During the construction time and after 15 years from the completion, I had asked Mr Khoo twice for renovation of my house :

Mr Khoo inform me that Ostable Panel is a frame structure, each wall panel consists of A Beam on top of the wall panel and with the horizontal projected starter bars from both side edge of the wall then it will be connected to the vertical Joints, design as columns.

I feel comfortable to stay within my house, the indoor room temperature is good once I open the window, the special design of natural ventilation system which provide good circulation throughout the house.

After 16 years, I can’t find any hair Line crack except the small area that was connected with the brick wall.

I sincerely hope that Ostable Panel System will continue to build A good quality house for the Nation of Malaysia. 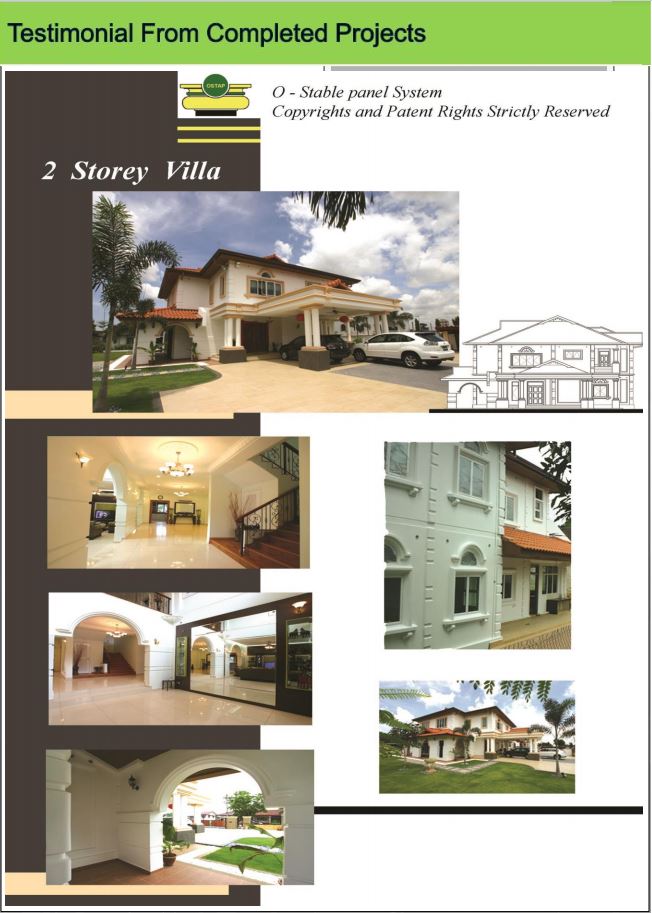 My double-storey detached house was completed within 9 months of commencement of construction. All the other Contractors in Johor were quoting a minimum of 18 months and finishing on average in 24 months. The use of the pre-cast panels know as O-Stable Panel System resulted in substantial savings in terms of time of construction.

The finishing is comparable to any house of traditional build. The walls are smooth and the lines clean and Mr Khoo the owner of the company was very good in sorting out any concerns I had with the build quality.

The most impressive feature of the cosntruction is ventilation system, which provide great air circulation throughout the house.

One of the best things about dealing with Ostap is the owner Mr Khoo's who has been reasonable on all issues and came up with many suggestions to solve various problems. I would highly reommend Ostap and Mr Khoo to build anyone a house and would be happy to let any potential clients see my house if they want a reference. 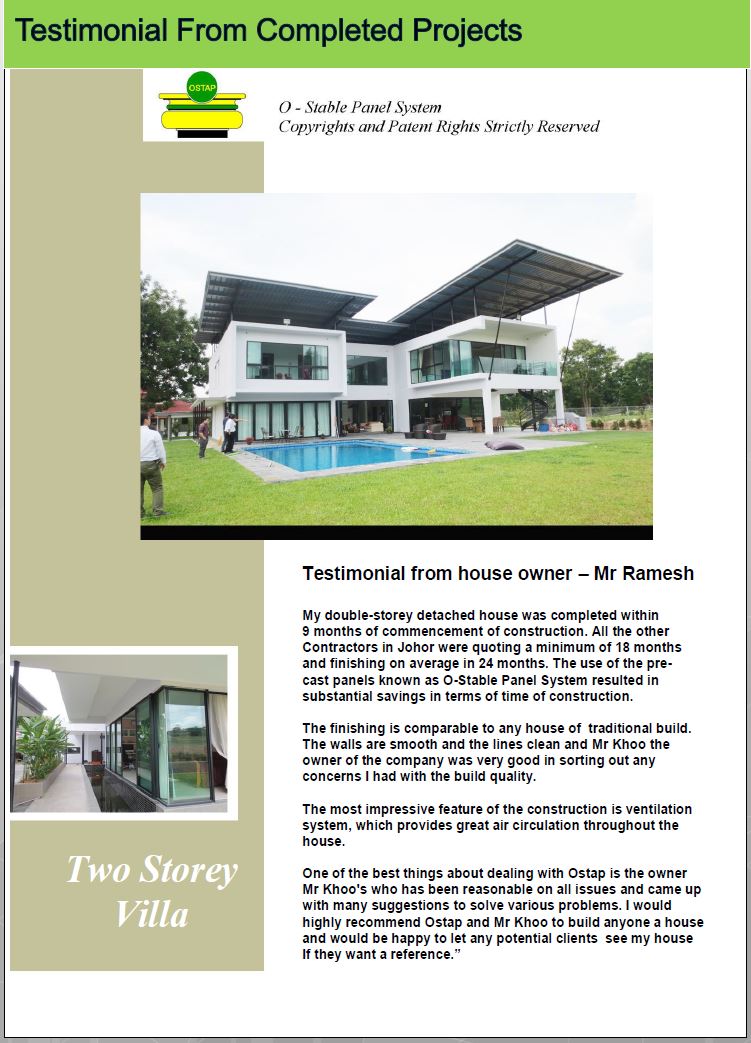 We love the shape of the colonial wall design and impressed with Mr. Khoo's designed of the hidden air-conditioner compressor placed on conrete plinth inside the ceiling of the bathroom.

We are glad that we had made the right decision to engage Mr Khoo's expertise and good workmanship in building our home. 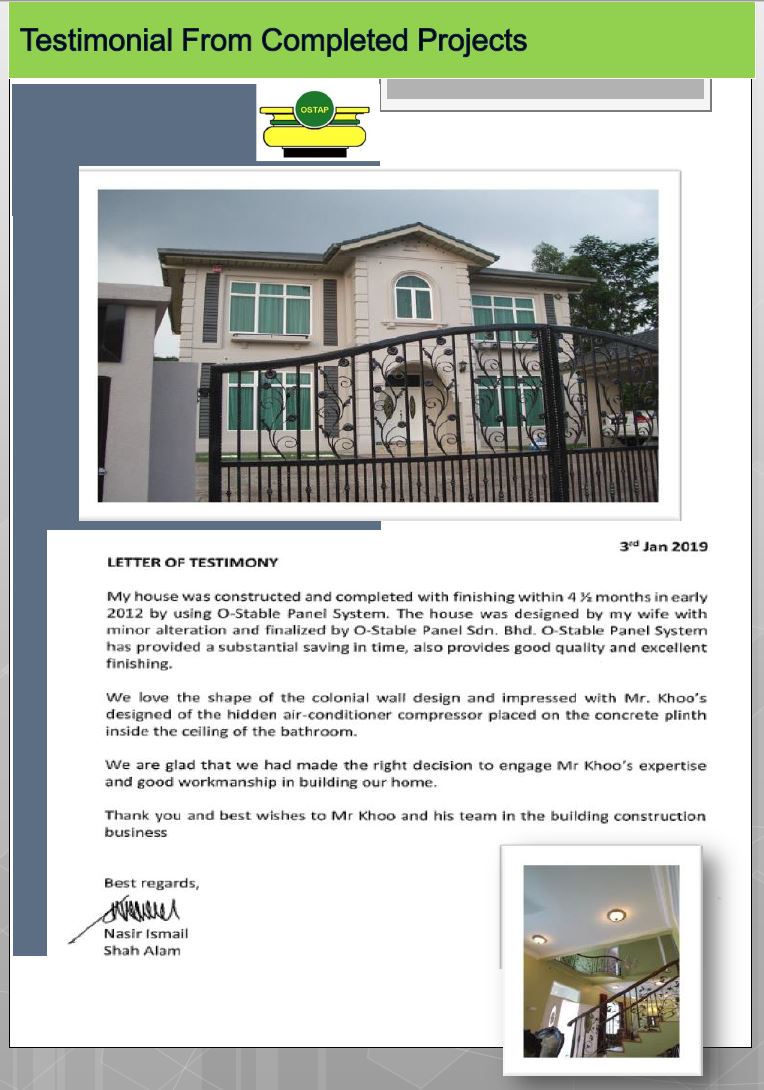 My house built using O-Stable Panel System was completed in the year 2006. Total duration took 6 months to complete that includes internal finishing works and demolition of the existing bungalow.

O-Stable Panel provides good quality of finishing. The painting works to the external wall lasted for more than 10 years without any fungus attached.

I think the O-Stable Panel System is one of the advanced systems in the market. Sooner or later the public may have to adopt the system for good quality of finishing, time-saving and with almost zero defect. 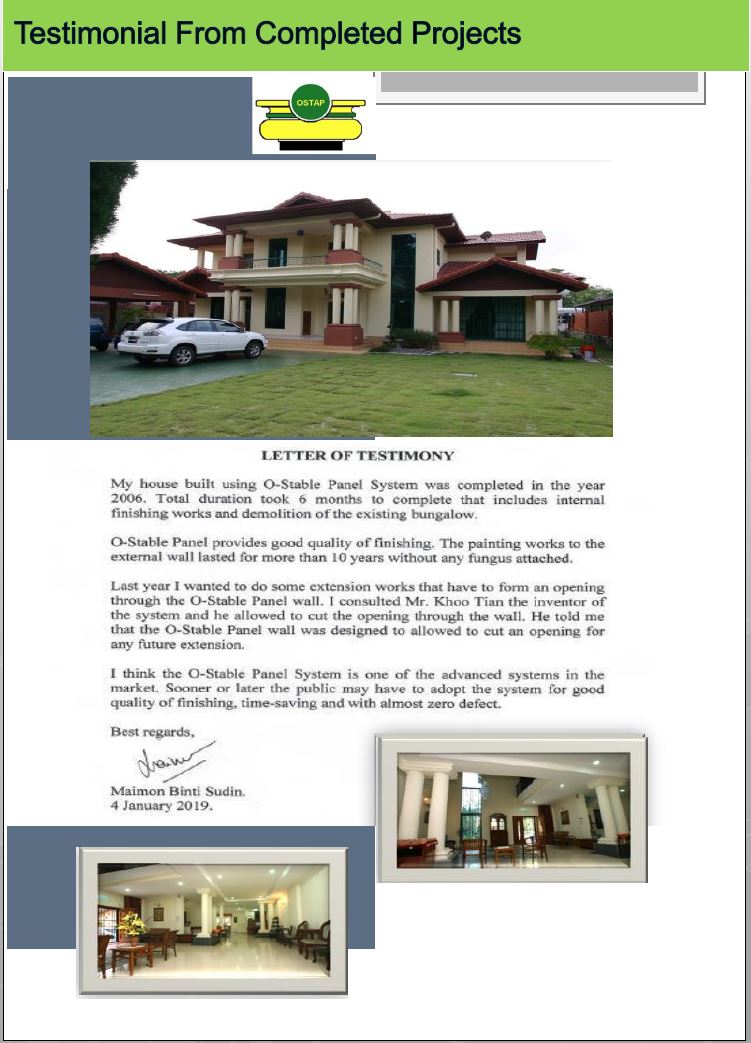 The founder of O-Stable Panel System, Mr. Khoo Tian, control the finance and cost within the given budget and construction period.

The patented Vertical construction joints (columns) are good that the sizes are even bigger than the conventional column which make it very flexible for the tolerance adjustment.

The construction joints would automatically become flush with the adjunction walls after the skincoat has been completed.

Mr. Khoo Tian was very good at sorting out any concern about the quality of finishing. His care and attention to detail clearly shine through.

The most impressive feature ist eh cross-ventilation system that provides good air circulation throughout the house and make the house very comfortable.

Another feature I like is the air-con compressor unit. It was concealed inside the house by providing the concrete ledge in the bathroom.

O-Stap is one of the good systems either on structural or architectural finishing due to almost zero-defect especially concerning the leakage problem.

Thanks again for completing this house for us in a professional and timely manner. We appreciate your efforts and results and would not hesitate to recommend you to others. 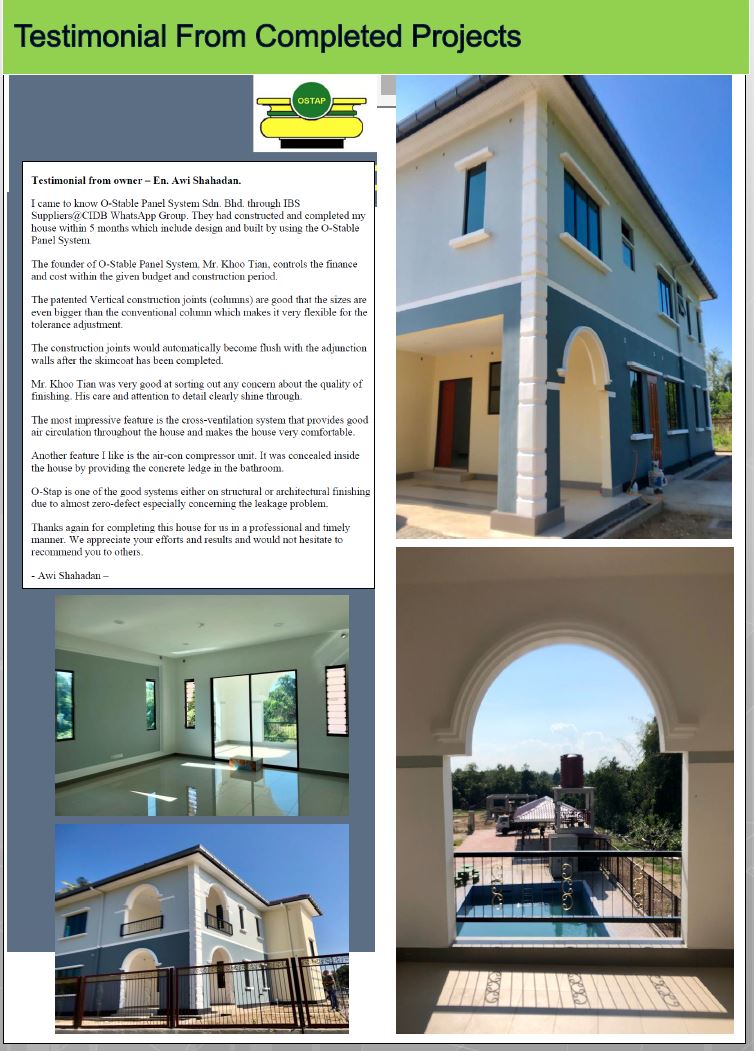 Mr Wong, Chairman Board of Governors

The Board of Governors, The Parent-Teacher Association of SJK (C) Confucian, we would like to extend our appreciation and gratitude to Baktian Sdn Bhd that has undertaken the task of constructing the extension of new classroms and staff administration office at our school. The work involved was to design and build, that also include of demolition and make good of the existing building.

The above-mentioned building was constructed by using the pre-cast panels known as "O-Stable Panel System" resulted in substantial savings of time. It also provided a good quality and excellent finishing, as the walls are smooth and the lines clean.

Baktian Sdn Bhd has commenced the work on 18 November 2003 and handed over the project to us on 18 February 2004. The effective working days were less than 2 months, taking into consideration that wthere were major public holidays of Hari Raya Puasa and Chinese New Year during the construction period.

We take this opportunity to thank Baktian Sdn Bhd for their generosity in donating the main entrance fencing and gate and also the guardhouse for the school. We sincerely hope that in the years to come, "O-Stable Panel System" will continue to be successful in other nature of building construction. 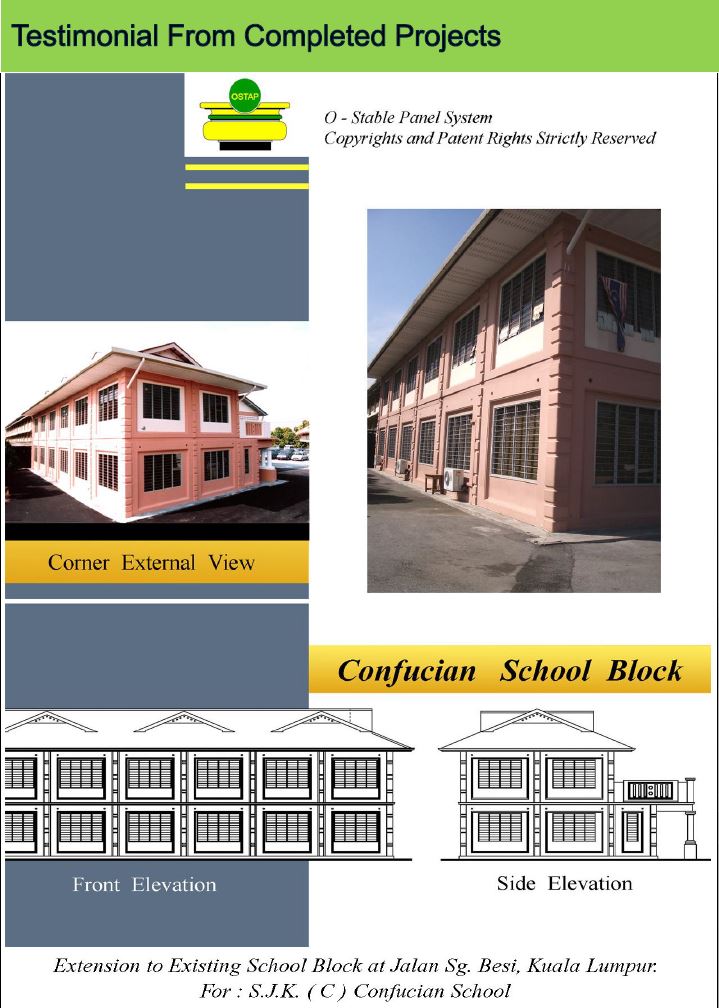 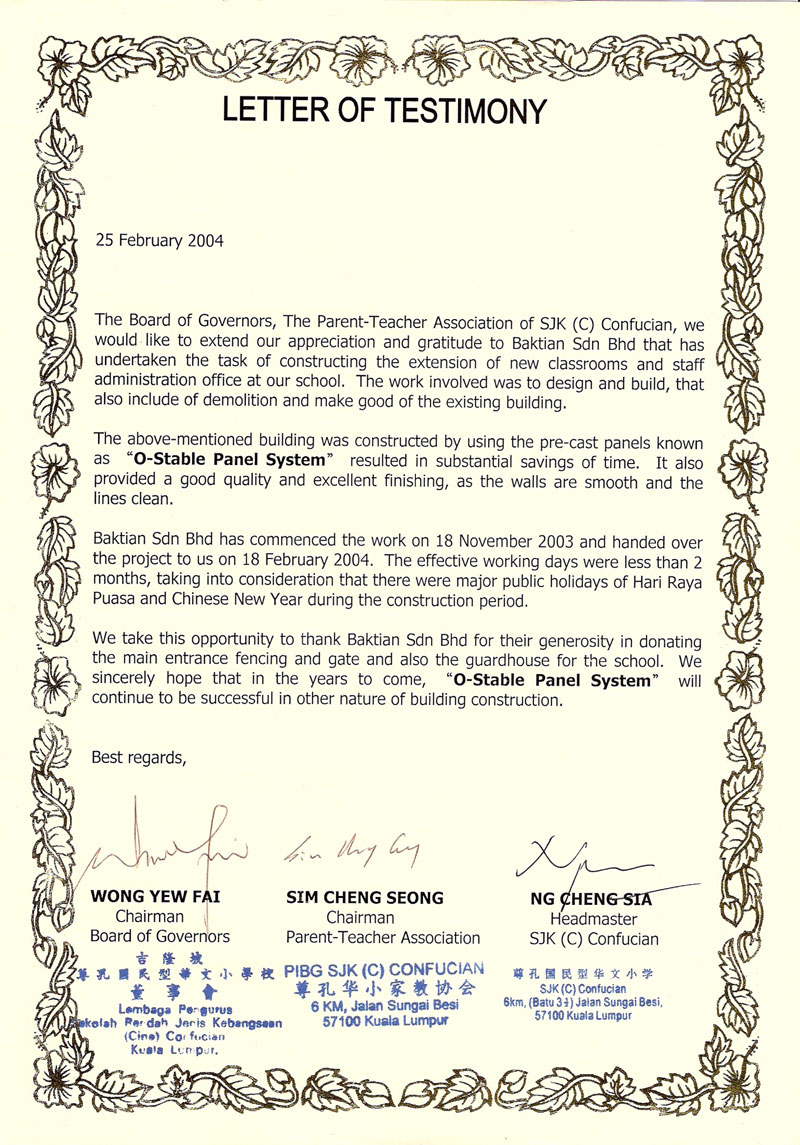